We are pleased to announce the release of version 1.0.0 of NLG Studio. With this release, we are bringing our unparalleled NLG tool to the general public, with improvements on the earlier controlled release. NLG Studio is already in high demand and will become a major part of
Arria’s 2018 sales strategy.

The Studio team has been busy putting all the best of Arria’s technology into one easy-to-use tool. With NLG Studio, both developers and non-developers can access the proven, rules-based linguistic capabilities and software architecture that Arria itself uses to build enterprise-level NLG systems for its global clients.

“I know we are going to see fantastic adoption of this product from now onwards.” – Chief Technology Officer Neil Burnett

NLG Studio’s key differentiators lie in the speed with which users can add NLG to their projects, and in how quickly users can deploy those projects and start using them in production. For this reason, the current release of NLG Studio is a giant step forward for Arria, and with it, the company consolidates its position globally as a leader in advanced NLG technologies.

Bringing NLG Capabilities to a Range of Users, from Novice to Expert
We believe our humanity is defined by language. We want to ensure, through our technologies, that humanity is at the heart of artificial intelligence. With NLG Studio, Arria’s competitive advantage is that we are equipping both developers and non-developers to build elaborate NLG systems.

“NLG Studio democratizes the development of NLG applications. Before Studio, only highly skilled software developers could do it. With Studio, anyone can build and deploy an enterprise-level NLG solution.” – Rodrigo de Oliveira, NLG engineer

NLG Studio is rich in features – yet its cloud-based, intuitive interface and its ease of use give even non-developers a way to rapidly create powerful NLG solutions. NLG Studio’s high level of configurability, along with the fact that the tool simply does not run out of power, is what sets this NLG offering apart from that of our competitors.

“NLG Studio is a tool that is both innovative and comprehensive, making natural language generation accessible to a range of users, like never before!” – Bracha Libman, software engineer 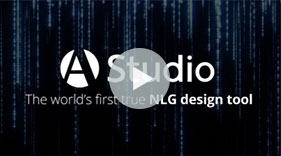 A Huge Amount of Power Under the Hood
Generation of natural-language narratives is becoming ever more prevalent – as an integrated feature of BI solutions, and alongside other cognitive technologies.

“Businesses can now unleash the power of data stories on their own by programming NLG Studio to discover and tell stories from their data assets.” – Founder & Chief Scientist Yaji Sripada

With this top-tier offering, Arria stands head and shoulders above its competitors in the NLG sphere. This is because with NLG Studio, you can start simply, configure your project to be exactly what your users want, and over time, build increasingly sophisticated systems.

“NLG Studio opens up new avenues for efficient and effective information delivery by allowing users to create and deploy applications in the cloud and to interface with the ever-growing connected and smart device space.” – Senior NLG Engineer Kapila Ponnamperuma

The Power of Language
We believe that Arria is igniting a global revolution in communication. Our NLG tools will fundamentally change the way people interact with technology.

“Studio makes Arria’s world-leading NLG technology available and accessible to a wide range of developers and users. I look forward to seeing all of the great things that people will do with Studio!” – Founder & Chief Scientist Ehud Reiter

Our scientists and their core technology team have downloaded their own powers and skills into NLG Studio and in so doing have empowered millions of people (developers and non-developers alike) to add the Power of Language to the Datasphere.